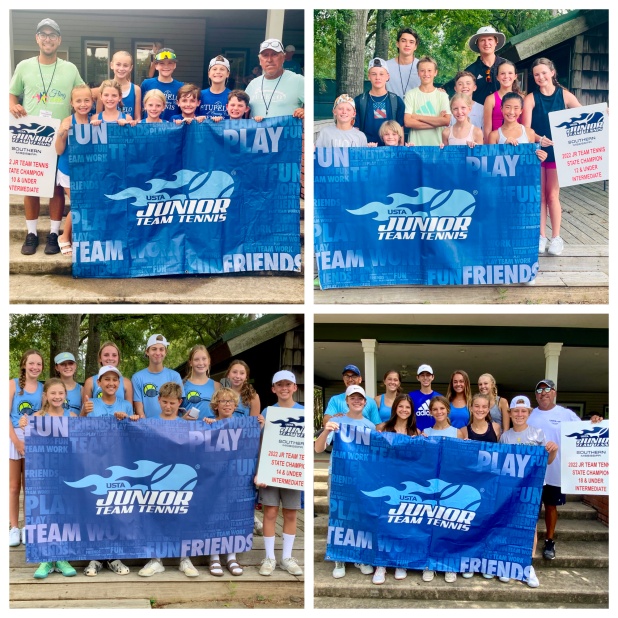 USTA Mississippi held it’s Jr Team Tennis State Championship this past weekend, crowning champions in the 10U, 12U, 14U, and 18U divisions.  Teams competed in 10 local leagues this summer to earn the right to advance to the JTT State Championship, and over 40 teams and 330 kids qualified to attend what has become the largest junior tournament in the state by participation.

The four division winners earned the right to advance on to the “Southern Junior Team Tennis League Sectional Championship,” which will be held September 3-5 in Rome, GA.

Coed teams made up of a minimum of 3 boys and 3 girls per team participated in the event, with everyone having the opportunity to enjoy festivities such as player lunches, a party, and snow cones!

Northeast MS teams won 3 of the 4 divisions, as Tupelo Country Club, captained by Omar Alcaino, continued their run of having state championship caliber teams.  They captured the state title in the 18U and 10U Divisions, while the Northeast MS Young Stars, captained by Jared Grimes out of Rob Leake Park in Tupelo were the champs in the 12U Division.  The Gulf Coast also continued a strong run of showings at the JTT State event, as the Bayou Bluff Tennis Club Pen Pals captained by Lindsey Byrd won the 14U Division.

“USTA Jr Team Tennis is one of the most fun experiences you can have growing up as a junior player since you get to play as a part of a team with your friends,” said Angie Deleon, the Tournament Director for the event.  “We tried to make this a really fun event for the kids with prizes, parties, snow cones, sportsmanship awards, and amenities so they’ll remember the experience and want to continue to participate for years to come.  We’re grateful to every one of the facilities, the staff, and all of our partners that allowed us to put on a great event for the kids.”