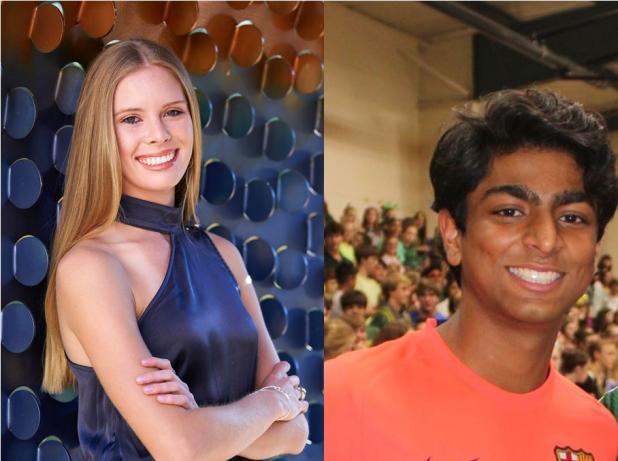 The Mississippi Tennis Association is proud to announce that the recipients of the 2019 educational scholarships were Anna Mackenzie Nichols of Jackson and Sunjay Chawla of Greenwood. Now in its nineteenth  year, the program awards scholarships each year to a deserving young man and woman based on their accomplishments in the classroom, on the tennis court, and in the community.

Mackenzie is the daughter of Mr. and Mrs. Michael Nichols of Jackson. She is a graduating senior in the class of 2019 at Jackson Preparatory School in Flowood. While at Prep, she has maintained a 95 or above average in all her classes. She is a member of the Mu Alpha Theta Math Honor Society, Chi Alpha Mu Math Honor Society (9th), the National Honor Society, and the Sociedad Honoraria Hispanica. She is also a National Spanish Exam Silver Medalist in the ninth and tenth grades. Just a few examples of her leadership ability are serving on the Student Council in the 12th grade, mentoring a sixth grader as a senior, serving as the secretary of Mu Alpha Theta (12th), and being captain of the Prep Tennis Team (11th and 12th). Perhaps most telling is the fact that she was selected as one of 20 Mississippi Christian Leaders of the Future as a senior. Her community service ranges from volunteering to work with  special needs children, serving at Stewpot, working with the Salvation Army’s Angel Tree and Bell Ringers to working with CARA of Mississippi and the Make a Difference Project in downtown Jackson. Until the age of 12, Mackenzie was a competitive swimmer; switching her focus from swimming to tennis was a big challenge, but she found a real passion for the game. Losing match after match at first taught her the importance of hard work and learning from her mistakes, until she eventually achieved a consistent top five ranking in Mississippi and was successful on the state high school level. She played on the Southern Cup in Girls’ 18s and has represented Mississippi at the Southern Closed since the age of 13. She was awarded the 2018 George Wilkinson Memorial Award for Sportsmanship by the MTA and was the Wendy’s High School Heisman winner for Jackson Prep. Mackenzie plans to attend Texas Christian University, where she will pursue a career in the medical field. She plans to continue playing tennis, though not competitively. “Tennis has taught me more life lessons than I can express…,” and she plans to cherish the game for many years to come.

The son of Mr. and Mrs. Suresh Chawla of Greenwood, Sunjay is a graduating senior at Pillow Academy. Sunjay has been an excellent student throughout his school years. At the end of each of his high school years, he received at least one and sometimes as many as four awards for top academic achievement. He served as an officer in the Junior National Honor Society and the National Honor Society, the Spanish Club, and Mu Alpha Theta. He attended American Legion Boys State and won the Hugh O’Brien Youth Leadership award. He participated in the Trent Lott Leadership Program at Ole Miss as a rising senior. For his Eagle Scout project, in cooperation with the city, Sunjay built a tennis wall at Whittington Park in Greenwood for underprivileged youth to practice against, including a deck and landscaping. Working with the tennis coach at Greenwood High, he taught fundamental tennis to beginners, supplying them with old racquets and tennis balls. Sunjay created the Chawla ACT Institute and tutored 14 students in the skills needed to improve their scores on this standardized test. He even provided food and drinks for the students to encourage them to come to the after-school class. Perhaps the award that tells us the most about this outstanding this young man is the award he won recently. Sunjay is the recipient of the national Wendy’s High School Heisman award, given to the top student athlete dedicated to community service in the entire United States. With all this going on, one wonders how he found time for any extra-curricular activity. Surprisingly, Sunjay was captain of the Greenwood High Tennis Team, leading them to four Academy AAAA Division II state championships and winning four individual championships in singles. As captain of the soccer team, he has led the team in scoring for the last two years and scored the winning goal in the 2017 state championship game. He was also captain of the golf team, which finished in third place in the Academy AAAA Division II state championship in 2017. Sunjay plans to attend Southern Methodist University earning his degree in Economics and Statistics. After graduation, he plans to come home to the Mississippi Delta, where he hopes to be a part of something that brings change to that region.