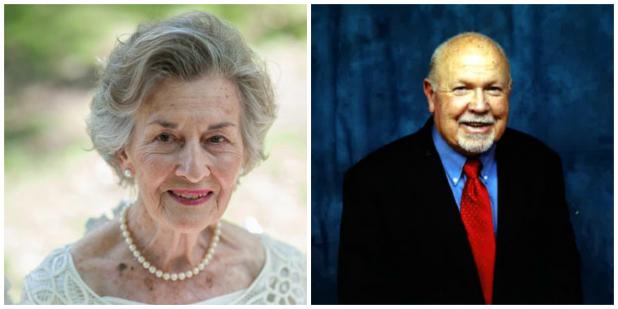 The Tennis Foundation of Mississippi is pleased to announce that Barbara Ann Varner of Cleveland and Paul Johnson of Fulton are the 2016 inductees into the Mississippi Tennis Hall of Fame.   Both inductees have long been associated with tennis in the state and, through their play, support, and instruction, have left an unmistakable imprint on Mississippi tennis.

Barbara started her winning ways at Greenville High School, where she won a mixed doubles state championship in 1947.  After college, she married Rogers Varner and over the years, the whole family—Barbara, Rogers, and all three of their sons—became active in tennis all across the Delta.   She assisted the Cleveland High School tennis coach from 1966 to 1978.   When Title IX mandated equal opportunities for women athletes in the mid-seventies, Barbara was the obvious choice to spearhead the fledgling women’s tennis program at Delta State.   She worked with no pay, on a shoestring budget, to set up the schedule, arrange the transportation, recruit talented players, and run the practices.   At the same time, she had to check grades to ensure eligibility and serve as a counselor when the girls had problems.   This gracious lady was an excellent role model for all her girls.   On the tennis court, however, Barbara was a formidable opponent, holding a top ten ranking in both the Southern Section and Mississippi in both singles and doubles 35 and 45 age divisions from 1975 through 1985.   Her partners included Hall of Famers Carolyn Henry, Jean Peabody, and Eleanor Shaw.   In addition to actually playing tennis, she served as a tournament director for the Delta Junior Championships for three years, as well as other tournaments across the Delta.   She also worked tirelessly in various fund-raising projects to build new courts or to send promising young players to tennis camps.  One of her nominees called her a pioneer in women’s sports on the level with Margaret Wade.  Mrs.  Varner still makes her home in Cleveland.

Paul Johnson grew up in Nettleton, where he was very involved in sports, lettering in baseball, basketball, and football.  After high school, he played football at Itawamba Junior College and then continued his studies at Mississippi State, where he earned a BS degree in Physical Education and Biological Science.   His first coaching position was as an assistant football coach and head women’s basketball coach at Ackerman High School for two years.  After a one year stint at Houston High School, he returned to IJC as an assistant football coach and health science instructor.   In 1974 he started the men’s and women’s tennis programs while teaching science and coaching the cross-country team.   After he retired from teaching, he continued to coach tennis for eleven years for a combined total of 45 years of service to the young men and women of Mississippi.   His tennis teams won a total of 15 state championships and 7 Region 23 championships.   He was named state tennis Coach of the Year nine times and Region 23 Coach of the Year eight times.  He was the MTA Junior Coach of the Year in 2003 and MTA Coach of the Year in 2008.  In 2008, he also received the Hershel Stephens Coaches’ Award for Outstanding Service and Dedication to the NJCAA.   In 2009 he was inducted into both the Itawamba Community College Athletic Hall of Fame and NJCAA Men’s Tennis Hall of Fame.  In 2010 he was inducted into the Mississippi Association of Coaches Athletic Hall of Fame.   In addition to his involvement with collegiate tennis, Paul also worked with numerous junior players in the summer months giving private lessons and encouragement to his students to participate in USTA junior tournaments.   Paul has been married to his wife Brenda for 49 years, and they have two grown children, Leigh and Mitch, both of whom played tennis at Itawamba.