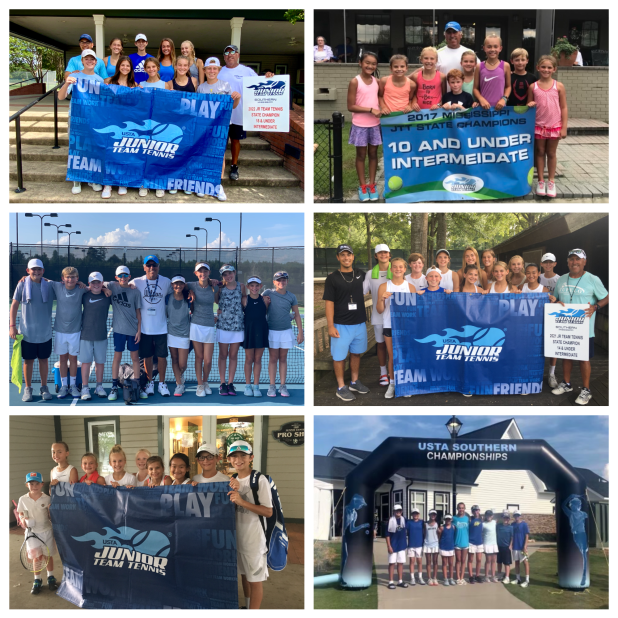 Fri, 08/12/2022 - 4:47pm
For almost a decade now, Tupelo Country Club Junior Team Tennis teams have been one of the top performers at the State Championships. The current 18 and Under team has had its same core group of players and friends together for years, and in July won state together for the fourth time in four different age divisions. The group has grown up together and has now won state championships in JTT in the 10U, 12U, 14U, and 18U divisions. Omar Alcaino, head pro at TCC, has had the pleasure of seeing this group grow up and have consistent play on court.
“When I got here, the kids didn’t have a Junior Team Tennis group. I created it so that the current 18’s could have something to do during the summer other than playing tournaments and with that, the team atmosphere grew and helped bring them together,” said Alcaino.
“Playing as a team matters with trying to win each game and the kids know that.”
Alcaino went on to describe how USTA Jr Team Tennis has made a positive impact on the kids, parents, and program at Tupelo Country Club.
“With the relationship I have with these kids and their parents, they know it’s all about the kids having fun and enjoying tennis and we have been successful that way. The kids care about one another. They all go to the same schools and live in the same neighborhoods. They started at 8-9 years old and now they’re 15-16 so they’ve known each other for a long time. They’re a great group of kids.”
“This group was my first, so I’ve seen them grow and grow as people and tennis players and they’re very dear to my heart. They’ve trusted me in getting them involved in Junior Team Tennis and now there are other teams at our Club trying to emulate what the 18’s group did. It has helped myself and this club by being involved in Junior Team Tennis and I’ve loved it with helping promote the game of tennis.”
The 18U team will be headed to the Southern Sectional Tournament to represent Mississippi, which will be held September 2-4 in Rome, Georgia. Be on the lookout for updates on Sectionalson our Facebook and Instagram!

END_OF_DOCUMENT_TOKEN_TO_BE_REPLACED

Register to Host a Fall Tennis Fest at Your Facility!

This fall, we are encouraging all public facilities, CTAs, NJTLs, and Park & Recs to promote tennis and your organization.