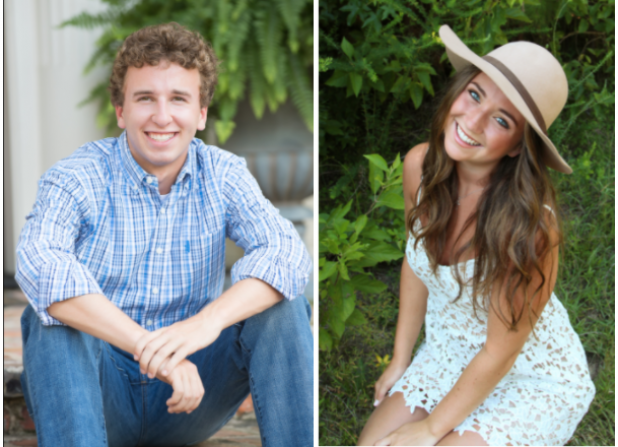 The Mississippi Tennis Association is proud to announce that the recipients of the 2020 educational scholarships were Hannah Ashley of Greenville and John Martin Fox of Brandon. Now in its twentieth year, the program awards scholarships each year to a deserving young man and woman based on their accomplishments in the classroom, on the tennis court, and in the community.

Hannah is a graduating senior of Washington School in Greenville.   She has achieved a GPA of 4.32 throughout her high school educational career.   She has been very busy serving as a cheerleader, track team member and of course a member of the tennis team 8-12th grade.   She served as a student council officer throughout high school, Rho Kappa president during her senior year, Key Club, SADD, Mu Alpha Theta, Fellowship of Christian Students and many others accomplishments.  She has volunteered for many years assisting with the Ole Miss/State tennis tournament held in Greenville as well as the Delta Cotton Belles tournament.   Having turned 18 this year, she was planning to play in her first Ole Miss/State tournament previous to the Covid 19 situation cancelling the event.  She has a dream to work with children and will be pursuing this in her collegiate educational career.  She has had an opportunity to serve as a tutor to elementary students and considered this a great honor to be approached by the parents of children she would babysit for.   This experience solidified her wanting to pursue this in her higher education.   It was a very rewarding experience to witness the children’s improvement in their grades.  She has approached tennis with a willingness to learn, also realizing during her career that this is a very mental game.   Coming from a junior varsity start and meeting the challenges of being an athlete, it took some time to move forward through challenge matches, eventually making it to the varsity squad.  Diving into some consistent practice routines, she understood what it was going to take to improve her skills.  With the season being cancelled due to the pandemic, she did go out with one of her hardest fought victories in also one of her longest matches of her career.  She plans to take the lessons from her tennis career and begin her collegiate experience attending Delta State University in the fall of 2020.

John Martin Fox of Brandon has achieved a 4.0 GPA throughout his high school career while being a National Merit Finalist (class of 2020), Phi Theta Kappa through Hinds Community College, Gold Medal Latin Exam three times running, a three year National Junior Classical League member, Mu Eta Sigma National Math Honor Society and adding to his tennis time, a Bach Festival piano competition superior ranking from 2012-2015.   Achieving the Eagle Scout within his activities he has also been ranked the number 1 in the Mississippi state tennis rankings.  Being introduced to tennis at an early age by his mother he continued to take lessons and joined the team competition of high school tennis as early as 6th grade.  He dove into USTA sanctioned tournaments as a teen with some strong results throughout his career.  He has qualified for Southern’s Closed reaching a third place finish at the Mississippi Endorsement tournament in 2019.  He played USTA junior tennis for several years and held the rank of #1 in the Mississippi 16’s division and #2 in the 18’s division, while compiling a record of 99 match wins and 46 losses. He quotes tennis as being his favorite activity throughout his high school career even getting involved in teaching younger kids during the summer.  He has taken away the discipline, hard work, mental toughness learned through tennis but most important are the friendships made throughout his tennis career.  He will be attending Mississippi State University as a Presidential Scholar and a member of the honors college where he will major in accounting and history.